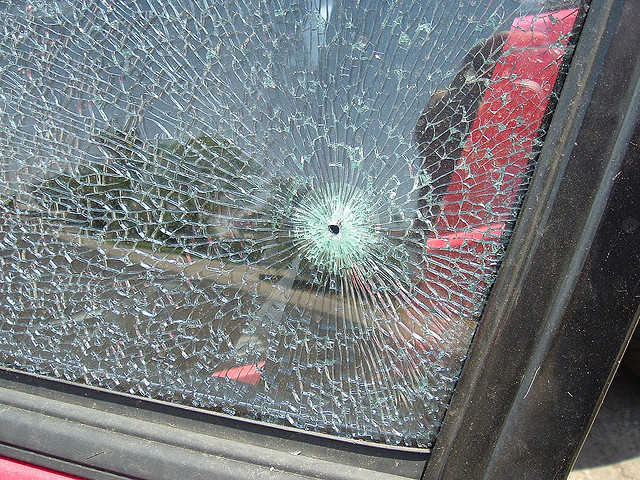 Because the amount of attacks by armed intruders has risen so dramatically over the past few years, more and more people are exploring the option of strengthening the window panes and glass entryways in their homes, offices and even schools. Until a few years ago, this was often a difficult and extremely expensive procedure, but the introduction of protective commercial security window film products has made this a more affordable option than ever before.

Why This Type of Commercial Security Window Film Should be Considered

When it comes to the safety of our loved ones, we often forget that any glass window or door is a potentially easy entry way into a building. This is because unlike bricks and mortar, most windows and glass doors simply break apart when struck with sharp or hard objects. By having protective commercial window tint installed, it will offer a substantial amount of protection as it will prevent an intruder from simply smashing a door or window and gaining entry into your home or a school building. Although this particular protective film has been designed to prevent glass shards from being strewn about in the event of an explosion, it also serves as additional protection in that it is able to keep intruders out.

Prevention is Better than Cure

It is a known fact that children are among the most vulnerable members of society simply because they don’t have the knowledge or strength to fight back against intruders. A prime example of this occurred during the Sandy Hook school shooting. Had the glass entry panels of this school been fitted with this protective security window film product, it could have prevented the shooter from gaining easy access to the school building thus saving countless lives in the process. This commercial security window film treatment product is also far more cost-effective than upgrading an entire school premises to security glass. In many cases, if perpetrators are slowed down or delayed, they will usually give up on their plans.

Available Throughout the Country

For those who take the security of their families and businesses seriously, using this protective commercial window film product will be a step in the right direction. In a lot of cases, you may find that your insurance company is willing to reduce your premiums because the film makes it more difficult for intruders to gain access to your property. It is important to stress however, that this protective film does not render windows or glass doors to be bullet proof. It keeps the glass in the opening and makes it extremely difficult for any unauthorized persons to gain access to a building. This window film product has been made available to professional window tint installers throughout the country.

Although it may seem like an expensive investment, having this protective film installed on your windows and glass doors will offer peace of mind knowing that your family and business are a lot safer than they ever were before.

Next
What is Reflective Electrochromic Window Film?